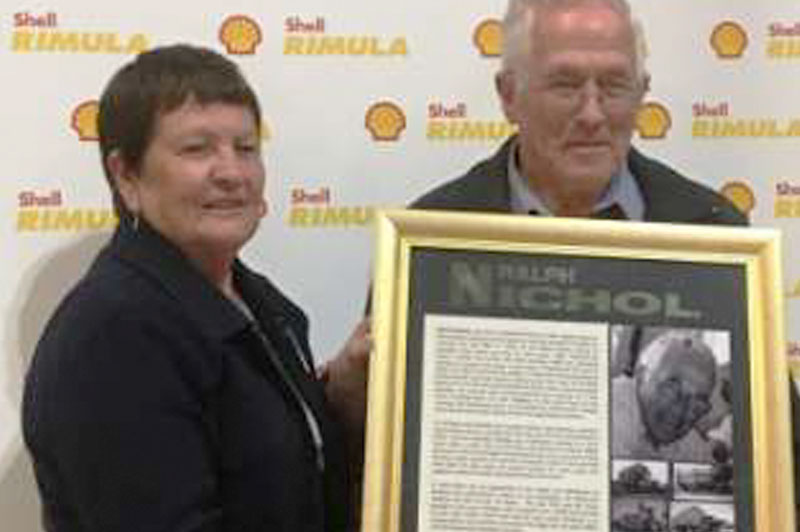 On the 26th of August Ralph Nichol was inducted into the Road Transport Hall of Fame at Alice Springs. It is a fitting tribute as Ralph has dedicated his life to the transport industry.

Ralph Nichol was born in Sunshine Victoria in 1934, with his career in the transport industry starting when he was aged 10. He worked alongside his father to maintain the first fleet of trucks at the Albion quarry during the transition from horse and dray to road trucks.

Ralph followed his father’s passion for trucks and absorbed as much as he could while working under his command, learning to operate and repair a vast range of equipment. As soon as he was able to convince his mother to leave school, Ralph found himself employment with anyone willing to give him a go.

Aged 13, Ralph got his first full time job working for Vic Hunt, a local transport operator, assisting with carting of anything that could go on a tray truck. This included carting block ice from Anglesea in the early hours of the morning and distributing direct to household ice chests before fridges were around. They also carted stooks of hay from local farms to Melton.

While working for Sunshine farmer and transport operator Lloyd Dolman at aged 15, Ralph decided the city life was not for him and boarded a steam train for Bendigo, winding up in Bamawm, Victoria working as a farm hand.

After a short stint in the army and gaining his licence, Ralph returned in 1953 and bought his first Austin tray truck and then met his wife Dorothy.

Ralph spotted the need for a livestock carrier in the area and soon built his own crate, carting livestock for many years, regularly updating his fleet of predominately Ford trucks.

In 1963 he saw an opportunity in the supply and distribution of fertiliser. Ralph constructed a depot on the Lockington rail siding and adapted his fleet to suit his needs. The in 1974 the worst drought in the areas history struck, with fertiliser sales dropping from approx 15000 tonne annually to just 1200.

Ralph started mining sand, which his sons would distribute into cement plants and foundries throughout Bendigo into the early 80’s until the demand for fertiliser returned. In 1993 Ralph built a fertiliser depot in Rochester, which his son Brian and family operate to this day with a fleet of 12 trucks employing over 20 staff.

Ralph and Dorothy Nichol retired to Bendigo in 2002 following 58 years in the transport industry.

Thanks to Brook Nichol for providing the photos and words.