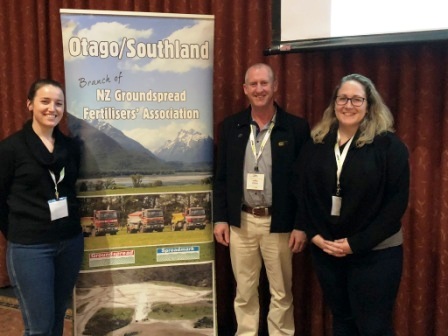 The New Zealand GFA conference was attended by Sara Rogers (TAS) and Emma Holdsworth (WA) on behalf of AFSA.

Sara and Emma have provided the following report on their time in NZ - they were very sad to say goodbye to new friends from across the pond.

Both Sara and Emma, were asked to represent AFSA at the NZGFA 2018 Conference and they would like to thank AFSA for giving them the opportunity. They would also like to thank NZGFA for making them feel so welcome and creating such an enjoyable conference for everyone in attendance, no doubt they will be in touch again in the future.

Our first night in Invercargill was a breeze. We must have been walking around with a big sign saying ‘We’re the Aussies’, because it didn’t take long for people to come over for a chat, everyone we met was extremely friendly and we were made to feel very welcome.

On arrival at the conference everyone received a welcome pack of bluff oysters, chocolates, bags of treats, and a lovely NZGFA compendium.

The conference speakers were excellent and the guest speakers inspirational.

It opened on Sunday night with a welcome from Gary Tong, Mayor of the Southland District Council, followed by the casual dinner sponsored by Mercedes Benz Trucks.

Tony Laker of Laker House of Travel in Invercargill, spoke of his life journey, born into a fishing family, working in a bank, travelling to the United Kingdom with only a few hundred dollars in his pocket, to starting his own travel agency with no idea what being a travel agent entailed.  The business, now the largest in Southland and one of the largest in New Zealand with an annual turnover in excess of $19mil, has won a number of awards including ‘New Zealand Retail Travel Agency of the Year’ in 2013, and ‘Best House of Travel Office in New Zealand’ in 2017.

Dean Rattray covered the importance of self-care and ensuring yourself and employees are fit for duty. He spoke of his journey to health.  From being 220kg at 42 years old, suffering from severe sleep apnoea and falling asleep at red lights, to dropping a whopping 125kg through a combination of hard work and a gastric sleeve operation.  Dean is now a personal trainer and aims to educate people on healthier choices for their life.  Sara discovered after the conference that it really is a small world as Dean is her Aunt’s neighbour in Ashburton.

A major focus of the NZGFA conference was Biosecurity, and specifically Micoplasma Bovis (M. Bovus).  M. Bovus has had a devastating effect on the South Island’s dairy and beef industries since being detected in July 2017.  A huge amount of work is being done by a number of organisations in collaboration to try and eradicate the disease from New Zealand.

There was significant discussion regarding the risk of spreading the disease from farm to farm on spreader trucks through mud or manure stuck to the truck.  Although the risk of the disease being spread this way is low it is still a big concern for spreaders in NZ, and many already had clean on/off farm processes in place to eliminate any potential to transfer the infection between farms. Several contractors indicated they maintain cleaning kits on trucks with a disinfectant containing Citric Acid which is effective against the bacteria.

Another issue discussed at length was Data Management. There were discussions on who has access to the data they record when spreading, who should be able to access that data, what they should be allowed to do with it & what should be supplied to the client. There was concern that companies providing the programs for tracking spreading and recording data may be accessing the data without the knowledge of contractors.

The formal dinner was a blast, with one of our delegates staying until the wee hours of the morning causing them to be somewhat worse for wear on the field trip the following day, not helped by the coach trip.

Our guest speaker for the night was Lloyd Matheson, Operations Manager at Southern Lakes Helicopters, and Te Anau Crew Chief for Lakes District Air Rescue Trust.  Lloyd was scheduled to speak at the opening dinner however was called out on a search & rescue.

Lloyd shared his background starting in the Police Force, and the important work the Trust does throughout the region.

On the final day of the conference we were treated to an excursion to showcase what Southland had to offer. After leaving Invercargill, we travelled approximately 30 minutes South to a town called Bluff, the southernmost town in mainland New Zealand.

We were lucky enough to be taken on a tour through Bluff’s Port, South Port, which is New Zealand’s southernmost commercial deep-water port.  Based on a 40ha man-made island harbour, the port operates year-round, 24 hours a day and handles over 3 million tonnes of cargo in a normal trading year.  Most of their imports are alumina, petroleum products, fertiliser, acid, stock food and cement, and they export aluminium, timber, logs, dairy, meat by-products, fish and woodchips.

After touring the port, we were able to look through the Bluff Maritime Museum and could explore an old oyster boat on display outside.

Lunch was held at the Bluff Rugby Club and an employee of Sanford, a local fishing company, gave us a presentation on their salmon farming operation, explained their processes and played a video showing the full cycle of the salmon’s life.

For the final dinner everyone got gussied up in their finest Western Hoedown attire and headed down to the Invercargill Workingmen’s Club. It was an excellent night, a local band entertained us, and the food was delicious.  During the night ‘fines’ were given out to those in attendance for ‘transgressions’ during the conference, including to one of our lovely delegates for her early morning partying antics, everything was in good fun and all proceeds from the fines were given to charity.

Following the conference both Sara and Emma spent some time travelling New Zealand.

Sara spent an additional 5 weeks in the country, driving from Invercargill to the North Island, visiting family, friends and then spending the remaining time on her partners dairy farm.  During her time on the North Island, Sara also had the chance to an aeroplane and helicopter at work spreading fertiliser. They are very effective at spreading steep hills and can spread a large quantity of fertiliser.

Emma spent almost 3 weeks in NZ in total, joined by her sister after the conference they travelled around the South Island before flying home.

We were very sad to say goodbye to our new friends from across the pond, we both felt so privileged to have been asked to represent AFSA at the NZGFA 2018 Conference and would like to thank you for giving us the opportunity. We would also like to thank NZGFA for making us feel so welcome and creating such an enjoyable conference for everyone in attendance, no doubt we will be in touch in the future.